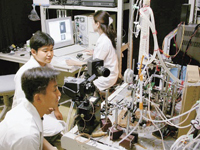 The Research Institute of Environmental Medicine (RIEM) was launched in 1946 as an institute attached to Nagoya University (the former Nagoya Imperial University). In 2004-2005, policies were established to shift the institute's main mission from space medicine to near-future environmental medicine. Our current objectives are to elucidate the mechanisms of, and develop preventive measures against, the serious health problems that may occur within the next 30 to 50 years. Those problems include decline in brain functions, an increase of sudden cardiac death, impaired immunity, developmental abnormalities in fetuses, and mental or physical suffering which can endanger the autonomic nervous and sensory systems. RIEM was reorganized in 2006 to enhance the research potential toward the new objectives and is now composed of two core research divisions: I. Stress Recognition and Response, and II. Stress Adaptation and Protection. In addition, a Futuristic Environmental Simulation Center was launched to replace the Space Medicine Research Center. Active collaborations with other institutions in Japan and abroad are under way by using largescale apparatuses (e.g., a hypobaric and low temperature chamber), and innovative research technologies (e.g., a high resolution optical mapping system, and tissue targeting molecules).