Institute of Liberal Arts and Sciences 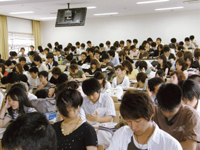 In its Academic Charter enacted in 2000, Nagoya University declared that it should cultivate courageous intellectuals gifted with rational thought and imagination. Liberal education is fundamental in carrying out this mission, and as an organization responsible for the university's liberal education the Institute of Liberal Arts and Sciences (ILAS) has been playing a vital role. Its history goes back to 1994, when, following the closure of the College of General Education, a new system was established for both common basic education and liberal arts and sciences. The core management body for this new organization consisted of two steering committees for which members were selected from all of the schools of Nagoya University. In December 2001, the committees were upgraded to the ILAS to seek further improvement in liberal education, and since then, the ILAS, as the headquarters of liberal education, has been playing an active role in planning, execution, evaluation, and management for Nagoya University's liberal education.