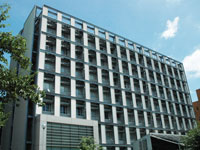 The Disaster Mitigation Research Center was founded in December 2010, with the aim of developing solutions to reduce damage caused by storms and floods associated with global warming and by a massive earthquake such as the Nankai Trough Earthquake. The center has worked to further cutting-edge research on disaster mitigation, and create a collaborative mitigation model through cooperation on various levels: 1) collaboration between different research areas, 2) inter-university partnerships beyond regional boundaries, and 3) cross-sectoral networks with key players in disaster preparedness including industry, government, and citizen organizations. The East Japan Earthquake, which hit the year after the center was launched, led to the establishment of the scheme to boost mitigation studies, together with the appointment of full-time faculty to the center, in January 2012.